May 1, 2017 – “One of the toughest questions I get asked is what my favourite dive site is,” says Caz of Brac Scuba Shack. “Our dive sites are ever changing, so it’s always hard for me to choose.”

However, if she has to choose, Caz’s favourite dive site is the wreck of the Russian frigate, #356 ‘Captain Keith Tibbetts’, sunk purposely just over 20 years ago and which has since become one of the most popular wreck dives in the Cayman islands.

When asked “why?” Caz will usually answer that it starts with the big stuff; the island favourites that make their home on this big chunk of metal. From the Nassau groupers that escort you on your tour, to the master of camouflage, the lesser spotted Goliath grouper that hides in the shadows and makes a rare appearance. The resident turtles and moray eels are there to welcome divers and so are the ever increasing population of barracuda. The wreck is the perfect home for these sea creatures and it’s unlikely to be going anywhere for a while.

While the big stuff is exciting to see, it’s the small stuff that is really fascinating to watch. Every dive seems to reveal more secretary blennies making their home in the fire coral on the wreck’s guns, peering out with their googly eyes as divers pass by. Juvenile French angel fish can be seen hiding in the midships section, while juvenile trunk fish just bob about on the control tower. An adorable, yet ferociously territorial, sailfin blenny can be found protecting his piece of pipe on the stern.

Alas, this juvenile playground does not stay fixed for very long. As with all children growing up and flying the nest, so the juveniles on the wreck also move on, but just as one wave leaves, another moves in to take their place.

Caz is never surprised at what she will find, as it changes weekly. So even if you have been to the wreck before or have it on your bucket list, expect it to be different each time.

Contact the Brac Scuba Shack to book this dive, or to find out more about their other dives, and to find out a bit more about some of the creatures to be found on this wreck dive, carry on reading. 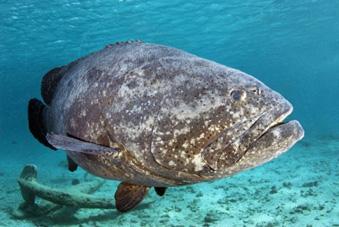 A large fish that can change color and gender, the Nassau grouper likes hanging around rocky bottoms and reefs and can be quite an aggressive predator, but you only need to worry if you are a parrotfish or the like as they are quite friendly towards humans. 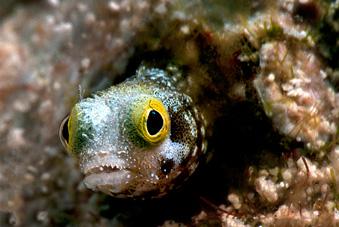 The secretary blenny is reminiscent of a secretary with thick-lensed glasses, but that’s not how it got its name. Actually they are named in honor of ichthyologist Dr. Böhlke’s secretary, Mary George, for all the work that she had done for him. They can be difficult to spot when they are hiding in their tube homes in the coral as they blend in so well with their surroundings. Secretary blennies can be found most often in their burrows and will only come out to snap up a passing morsel. Next time you spot one, watch their eyes and see how they move independently of each other. 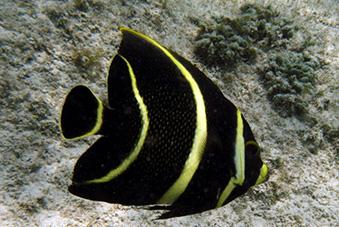 If you see a French angelfish on a dive and then see the juvenile, you could be forgiven for thinking that they were two different species. The juvenile French angelfish is dark with bright yellow bands that fade as they age, and rounded fins that become pointed as they get older and are quite different to their parents. The French angelfish tends to stick around places where there are plenty of crevasses to hide from predators. 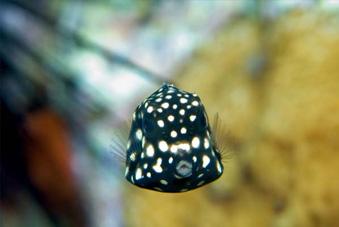 Trunkfish aren’t terribly good swimmers due to their small, soft fins and can often be seen just bobbing about in the current. They are a member of the boxfish family and the juveniles have a dark body with bright yellow spots all over, which fade to a more honeycomb appearance in places as they get older. Trunkfish look decidedly cute with their small pouty mouths, distinctive box shape, and ungainly swimming habits. 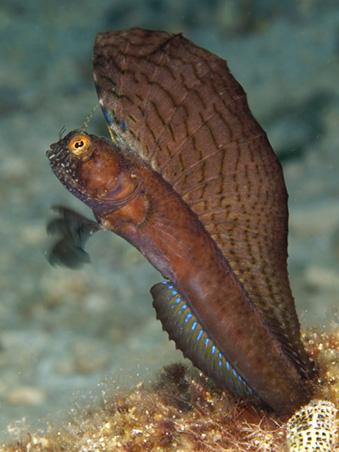 Small, but fiercely territorial, the sailfin blenny will whip up its sail when alarmed. They often inhabit abandoned holes or tubes in the coral where they are safe from predators. They rest on their ventral fins in their holes and only pop out occasionally. The males tend to be darker with a larger dorsal fin, which they raise and lower as a signal to attract a female.

Keep a lookout for the little guys on your next dive on the ‘Captain Keith Tibbetts’.